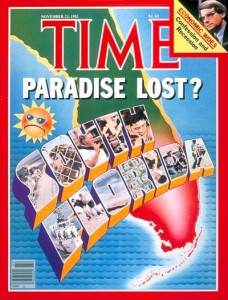 Miami has historically experienced highs and lows in the real estate market; it’s a normal cycle. Even when Time magazine’s cover declared Miami “Pardise Lost” in 1981, the Magic City’s real estate market bounced back stronger than ever. In 2008 when the demand for Miami luxury properties plummeted, given the city’s history, it could only mean that a rebound was on the horizon.

Today, many see tremendous value in Miami’s real estate market. In a recent article in the Washington Post, Shahab Karmely of KAR Properties in New York says the city is a place where developers can build and sell “a world-class condo for less than in São Paulo or Rio, or a third of what you would have to spend in New York and a fifth of London, Paris, Moscow, Shanghai or Tokyo.”

In the same article, Ron Shuffield, president of EWM Realty International, describes a city that has gone from being a cultural backwater by the beach to a recognized center of Latin American and contemporary art. “When Art Basel came here, it was just like the final stamp of approval that this is where it’s happening,” he said. Art Basel stages influential contemporary art shows annually in Basel, Switzerland, Hong Kong, and, since 2002, Miami. It is a world renown even that shines a spotlight on Miami every December.

In recent years, the buzz on Miami began to build yet again. Foreign buyers, primarily from Brazil and Columbia, stepped in with cash payments. Starchitects such as Renzo Piano and Rem Koolhaas have declared Miami as the destination for their latest projects.

One of the most recently noted superstar projects is the Faena House, designed by Norman Foster. Its first unit listed for $50 million and eventually sold for $60 million. This seemingly jaw-dropping price was marked the biggest sale ever for a single-family home in Miami-Dade County. Just what will a $50 million property get you in Miami today? The 8,273 square foot penthouse is fused with a 4,243 square foot lower unit for a combined 12,500 square feet according to Miamicurbed.com.

Miami has long been a desired location. With the siren call of its beaches, its tropical weather, and multicultural population, there’s no signs of its popularity ever waning.  Our paradise is  thriving leaving room for plenty of opportunity for investors to take advantage.

WashingtonPost.com, “What $50 million gets you in Miami’s resurgent condo market,” Carlos Harrison, 19 September 2015